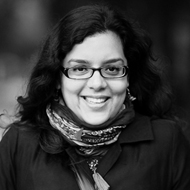 Graphic Designer and website illustrator Maria Teresa Cánepa. Began her experience designing flyers for music bands in Lima and doing t-shirts impressions.She has realized 2 individual expos : Hibrida in March 2009 based in a series o portraits as a way of homage to whom she consider her biggest inspirations like: Mexican painter Frida Khalo, poet Luis Hernandez, singer Morrissey, and singer Ely Guerra among others. In October 2009 she also presented Pasajera where the women in general is the main character on this proposal: big eyes, strong expressions, and organics forms are some of the drawing main attributes. Currently working as a freelance, she has a trademark of custom made pins make with fabrics and resin called "La Mujer Almohada". She also directs the independent space called "Los Unicos" aiming to realize drawing seminars as well as drawings